Knowing when the herb in your vaporizer is done is essential for an efficient vaping routine.

If you keep vaping while the herb in your vaporizer is finished, you won’t be inhaling any cannabinoids…

But will be inhaling a small amount of toxins…

Plus, the taste of your vapor will be horrible.

Today you’ll learn when the dry herb in your vaporizer is finished and you can throw it away, or even make edibles out of it.

Does Your Vaporizer Still Produce Vapor?

If your vaporizer still produces vapor, it usually means there are still cannabinoids to be extracted.

Whether these are the cannabinoids that you want or not, is a different question though.

What cannabinoids get extracted is partially dependent on vaping temperatures.

If you vape below 392°F(200°C), you can extract most of the THC inside your dry herb. But you will leave a significant amount other cannabinoids inside the herb. Cannabinoids like CBD, THCV and CBG need higher temperatures to be extracted in high concentrations.

So if you vape below 392°F(200°C) for 10 minutes, and increase the temperature afterwards, you will keep producing vapor…

These other cannabinoids have unique beneficial effects, but if you’re mostly looking to get high, you may want to avoid them in high concentrations.

So even if your vaporizer keeps producing vapor, your herb may be ‘finished’ for your specific purposes.

But how can you notice the THC inside your herb is largely finished?

You can’t really. THC doesn’t have a specific taste.

If you vape continuously, with most vaporizers, you will largely finish the THC within 5-10 minutes.

So if your vaporizer keeps producing a lot of vapor after 10 minutes, it’s likely that it mostly consists of other cannabinoids than THC.

What’s The Color of Your Herb?

When you’ve been vaping for 5-10 minutes and the color of your herb is gold-brownish, you know most of the THC is probably extracted.

But that doesn’t mean the other cannabinoids are extracted.

If you want to get the benefits of these other cannabinoids, you can simply keep vaping until the color of your herb is dark brownish. This holds especially true for conduction vaporizers.

After this, the taste gets so much worse, that you probably want to replace the bowl.

With convection vaporizers, the color is less reliable of a cue to determine whether the herb is finished.

Extracted herb from a convection vaporizer can still have some tints of green: 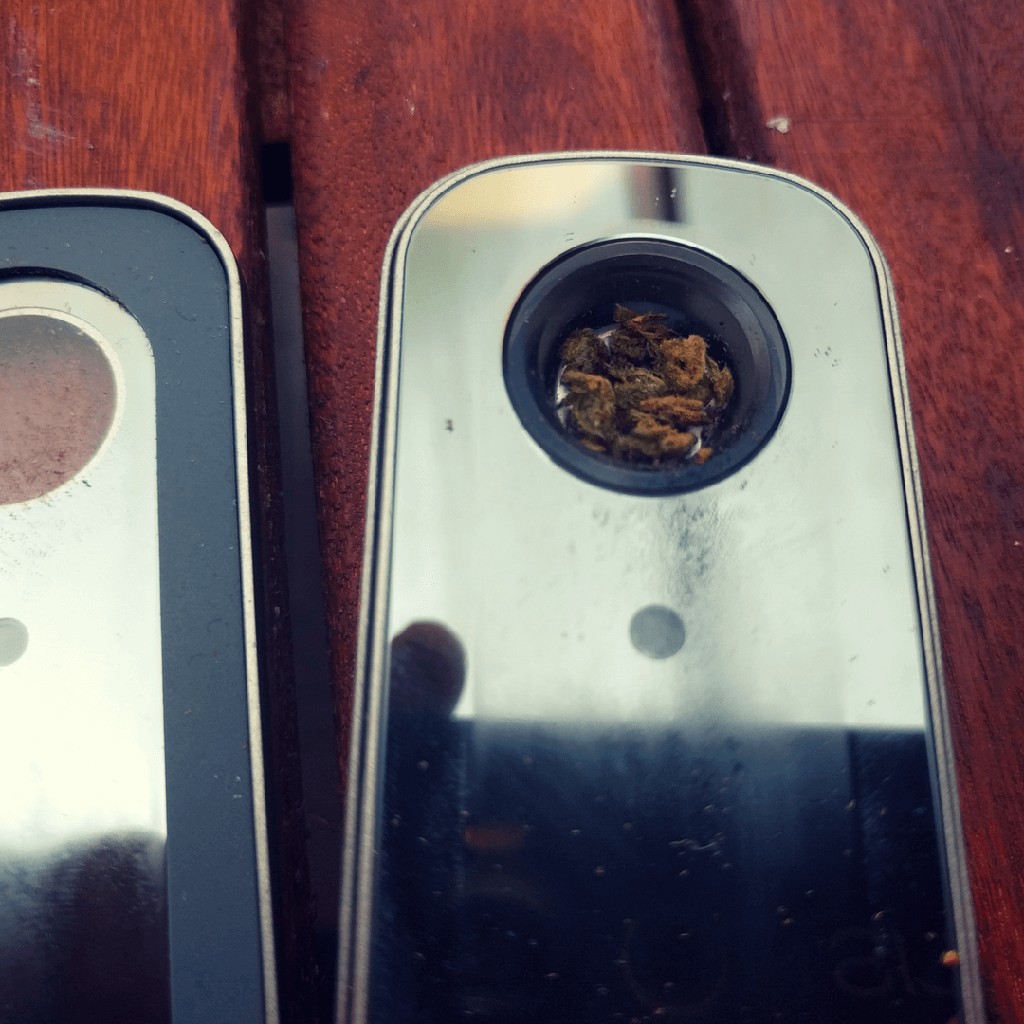 How’s The Taste of Your Herb

Terpenes are the type of compounds that give all the different cannabis strains their unique taste.

When you’re vaping cannabis and are really enjoying the taste, what you’re mostly enjoying are the terpenes.

But they’re also the most volatile compounds that vaporize the fastest.

If you’ve vaped for a while, you probably know that:

The longer you vape the same bowl, the worse the taste gets.

This is because all the terpenes vaporize in the first few minutes.

Once the terpenes are gone, the taste is gone.

The longer you vape the same bowl, the worse the taste gets.

Taste is a decent indicator of knowing then the dry herb inside your vaporizer is done. But it’s definitely not the best indicator.

After all terpenes boiled, there can still be a large amount of cannabinoids inside your dry herb.

In the next paragraph you’ll learn what you can do with this herb.

Click here if you want to learn more about the best ways to preserve the taste of your dry herb.

What You Can Do with ‘Finished’ Herb

Whether you vape until your vaporizer stops producing vapor…

Or whether you vape until the dry herb loses its taste…

It’s impossible to extract literally every milligram of cannabinoid out of your dry herb with a vaporizer.

How do we know this?

Because if you used any vaped herb to make edibles out of it, you’ll see that this edible will get you medicated. And this means there are still some cannabinoids inside the herb.

It doesn’t matter if you’ve vaped until your vaporizer stops producing vapor, at the highest temperature setting. This vaped dry herb can still be used to make an edible with.

Another thing you could do is use this vaped bud to roll a joint with. But I have to warn you:

It will taste horrible.

So the best thing you can do with ‘already vaped bud’ is use it to make edibles.

Even if your vaporizer still produces vapor, you may want to stop. Because the longer you vape the same bowl, and the higher the temperature, the more you’ll start inhaling cannabinoids that can reduce the effects of THC. CBD and THCV, for example, can make you feel less ‘high’.

The second method to check whether it’s finished is by checking the color of your herb. Fully extracted herb usually has gold-brownish color. Usually, the darker the color, the less cannabinoids are left inside.

The third method to check whether it’s finished is by judging the taste of your herb. This is the least accurate method though. Terpenes vaporize faster than cannabinoids. But it’s exactly the terpenes that give vapor its taste.

The best thing you can do with ‘finished’ herb is use it to make edibles.