Although most people are aware that smoking marijuana during pregnancy could have a negative impact on the development of the fetus, the same cannot be said about using CBD products.

According to the popular misconception, if cannabis products don’t make you high, there is no risk to the fetus or baby, and as such, it is completely safe to use them while pregnant.

What’s more, the time of pregnancy is difficult, as a woman’s body is changing, which leads to a range of unpleasant symptoms like nausea and headaches.

At the same time, it so happens that CBD may effectively reduce some of these unpleasant effects like nausea and headaches. However, because currently there are no comprehensive research studies available that prove CBD’s safety for the developing fetus, pregnant mother, or breastfed baby, the safest advice would be to stay away from CBD products during pregnancy and breastfeeding.

The limited research done on the topic indicates we cannot rule out potential health risks associated with using CBD during pregnancy and breastfeeding.

Is It Safe to Use CBD During Pregnancy? Review of Studies 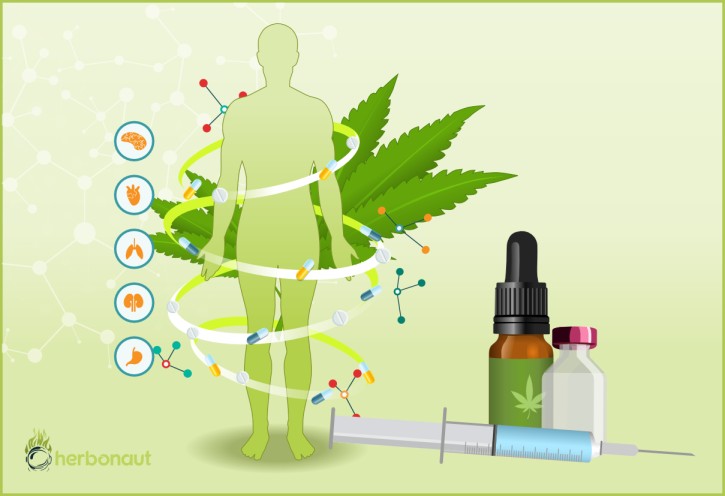 The short answer is that we don’t have evidence that shows that CBD use during pregnancy doesn’t have any potentially harmful side effects. Most data that we currently have seems to indicate that using CBD during pregnancy may pose risks for the developing fetus.

One study done on animal test subjects has shown that using CBD oil while pregnant could harm the development of the reproductive system of male babies (1), though we certainly need more research on this subject.

But there are more studies that indicate it may not be safe to use CBD during pregnancy.

CBD has been found to block the process of blood vessel formation in human umbilical vein endothelial cells (3). The same study reasons that this may lead to pregnancy complications, including placental insufficiency and pre-eclampsia.

CBD has potent anti-inflammatory effects. And while these anti-inflammatory effects, for example, are beneficial when it comes to pain conditions, in one study researchers share their concerns that CBD may modulate the immune system by altering cytokine (small proteins that have an important role in the growth and activity of immune system cells and blood cells) levels, affecting apoptosis (the elimination of unwanted cells by the body) which may ultimately deregulate a fetus’ developing immune system and pre-expose them to cancers and infections in their later life (2).

Further, we do know that CBD can have side effects when used by adults. In a great majority of cases, they aren’t particularly dangerous, but we must remember that a fetus doesn’t have a fully developed body, brain, and nervous system yet – it’s still growing, which means that it’s better to err on the side of caution.

Even if we find out that the use of CBD oil while pregnant, ultimately doesn’t have a major negative impact on developing fetuses, it might be that it could come into interactions with other drugs or even foods.

As we have mentioned at the beginning of this article, CBD has plenty of applications because of its profound effect on various physiological processes. Unfortunately, CBD also has the potential to interact with various prescription drugs.

Another problem with CBD use during pregnancy is that THC-free cannabis products might actually contain THC. That’s not a hypothetical and unlikely situation, but rather, a common occurrence.

In a 2017 study, researchers bought 84 CBD products from 31 companies, and then analyzed their content (4). 43% of products were under labeled (their potency was stronger than the label claimed), 26% – over labeled, whereas only 31% were accurately described.

CBD vape liquids were found to be mislabeled the most often, whereas the manufacturers of edible CBD oil were the most truthful (in 45% of cases).

What about their THC content? Although all of these products were labeled as not containing any THC, only 79% of them proved to be actually THC-free.

Why Do Women Use CBD Oil During Pregnancy?

As we have previously mentioned, CBD has a wide range of benefits, but pregnant women use CBD oil and other CBD-infused products particularly to deal with morning sickness.

CBD oil can actually help relieve some pregnancy symptoms like anxiety and nausea. However, even if it’s effective, it doesn’t mean that there aren’t any long-term effects on the developing fetus. 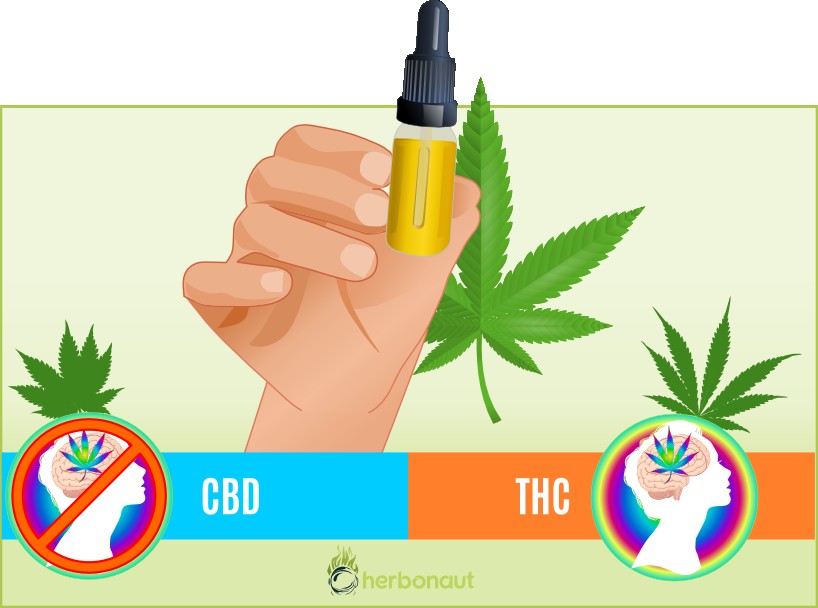 Although both THC and CBD can be found in most CBD products, their effects are somewhat different. Studies have shown that CBD can be helpful with conditions such as:

CBD lacks any psychoactive properties, which, simply put, means that if you consume a THC-free CBD product, you won’t get high.

When it comes to THC, another hemp-derived compound that can be found in some CBD products, it’s associated with various health benefits that are mostly overlapping with the ones on the previous list. THC may be useful for:

However, there are some major differences between CBD and THC. The biggest one is that THC has psychoactive properties, meaning it can make you high. THC also is associated with more unpleasant side effects than CBD, like:

RELATED: Does CBD Make You High?

Although studies indicate that CBD is the safer one of these two substances, CBD is also associated with side effects. The possible side effects of using CBD oil and other CBD-infused products include:

Despite their side effects, CBD and THC products can actually be helpful when dealing with a wide range of health problems.

However, we recommend taking most of such assertions with a grain of salt unless you are provided with several studies to back these claims.

Although it can help you relax, CBD won’t make you high. As such, you may think that the logical conclusion would be that the use of CBD during pregnancy shouldn’t carry any risks. But there’s no scientific evidence supporting this notion. While studies that looked at the effects of CBD on a developing fetus or baby are limited, there’s a vast body of research that looked at the effects of cannabis and THC.

What Does Science Say About Marijuana Consumption During Pregnancy?

Many marijuana enthusiasts might be reluctant to rely on established authorities’ opinions in the medical world, as in the past, the nature of their favorite plant was often misrepresented.

However, the important thing is that those aren’t just empty words that aim to discourage people from smoking marijuana without good reason – instead, they are based on reliable studies.

Jerome Adams, who is the Surgeon General (5), points out that cannabis use during pregnancy can impact the developing fetus in several ways:

Apart from that, the usage of cannabis products is discouraged even after pregnancy. If the mother is breastfeeding, the cannabinoids (like THC and CBD) leaking into the breastmilk could lead to the baby’s hyperactivity and impairment of cognitive functions (8).

The American College of Obstetricians and Gynecologists likewise discourages women from the use of cannabis while pregnant (9). Some pregnant women use cannabis to deal with unpleasant symptoms, such as morning sickness and headaches.

However, ACOG warns medical professionals against prescribing marijuana products for pregnant women, citing the lack of reliable research that proves its safety during pregnancy.

Substance Abuse and Mental Health Services Administration cautions women about smoking cannabis during pregnancy, as marijuana smoke contains many toxic compounds (10). It points out that there is evidence, although not as strong, that cannabis use among pregnant women could lead to preterm delivery.

On the other hand, a claim that marijuana use leads to lower birth weight is once again repeated, citing a study that shows that on average, women who use cannabis products during pregnancy deliver babies that are 110g lighter (11).

However, this data refers to the use of cannabis in pregnant women. Although admittedly, we need more research on this subject, it seems that cannabis use during pregnancy could impair the development of the fetus, and this may partially be attributed to the effects of CBD.

Is It Common to Use Cannabis and CBD Products During Pregnancy?

Unfortunately, the data about the number of pregnant women using cannabis is worrying. A study conducted in 2019 found out that in 2002, 3.4% of women used marijuana while pregnant, but in 2017 this figure rose to 7% (12).

Researchers have also focused on cannabis consumption in different trimesters. What’s most concerning is that in 2002, only 0.5% of women admitted to using CBD during pregnancy, but in 2017 it was already 2.5%. CBD-use is on the rise, also among pregnant women.

Does It Matter At What Timeframe Exactly CBD Is Consumed During Pregnancy?

There aren’t any studies on the severity of the harm being done to the developing fetus, depending on the trimester in which a mother uses cannabis products.

When it comes to alcohol consumption, most studies indicate that drinking a little bit of alcohol in the first trimester has a less negative impact on the developing fetus than drinking in a second or third trimester (13, 14).

However, other pieces of research show that drinking at the beginning of a pregnancy is more likely to lead to fetal alcohol syndrome (15).

In the absence of reliable studies, we can only speculate that CBD consumption in the second and the third trimester similarly could be more harmful to the fetus, though we want to stress that so far, there is no science to back it up.

So far, there are not enough studies on the effects of CBD on developing fetuses, and as such, it’s best to avoid using CBD products during pregnancy. The few studies that have been done on the topic, indicate that CBD use may result in long-term health risks for the developing fetus, health risks like, disrupted testicular function for males, compromised development of the immune system, and compromised blood vessel formation.

Apart from that, the studies have shown that the claims of CBD products being THC-free are often misleading. That’s why we highly recommend avoiding any CBD products during pregnancy and breastfeeding.

Office of the Surgeon General. (2021, August 13). U.S. Surgeon General’s Advisory: Marijuana Use and the Developing Brain. Retrieved from https://www.hhs.gov/surgeongeneral/reports-and-publications/addiction-and-substance-misuse/advisory-on-marijuana-use-and-developing-brain/index.html

National Academies of Sciences, Engineering, and Medicine. 2017. The Health Effects of Cannabis and Cannabinoids: The Current State of Evidence and Recommendations for Research. Washington, DC: The National Academies Press. https://doi.org/10.17226/24625

Marijuana Use During Pregnancy and Lactation. (2015). Retrieved from https://www.acog.org/clinical/clinical-guidance/committee-opinion/articles/2017/10/marijuana-use-during-pregnancy-and-lactation#