Today you'll learn the pros and cons of vaping your weed vs. smoking it.

You'll also learn that vaping marijuana isn't completely without health risks and how you can vape in the safest possible manner.

Of course, it all starts with getting a safe vaporizer.

Because if you don't get a safe vaporizer, you risk damaging your health even more with vaping compared to smoking weed.

Because vaporizers heat up to high temperatures and if there are materials in your vaporizer that can't stand the heat, you risk inhaling toxic chemicals.

To avoid these types of risks it's important that you get a vaporizer from a reputable brand with a proven track record.

Getting a safe vaporizer from a reputable brand is a topic on its own, which you can read about here.

The 5 Biggest Benefits of Vaping Weed vs Smoking It

The Downsides of Vaping vs. Smoking Marijuana

Smoking, whether its marijuana, tobacco, or any other plant material:

When you smoke, you ingest all these harmful compounds into your body. Decades-long research has proven that compounds found in marijuana smoke are extremely harmful to human health.

While some studies emphasize this last point that cannabis smoke could increase cancer risk, other studies conclude that there are no links between smoking marijuana and lung cancer (5).

The bottom line is that the effects of marijuana smoke on cancer risk are far from conclusive at this point in time.

But what we do know with certainty is that smoking cannabis has been shown to increase respiratory symptoms (6), like:

And don't think these are only ‘light' or relatively harmless conditions.

There have, in fact, been several studies that found cases of heavy cannabis smokers having cases of severe bullous lung disease and pneumothorax (7, 8, 9, 10). Both of these conditions can cause irreversible lung damage. 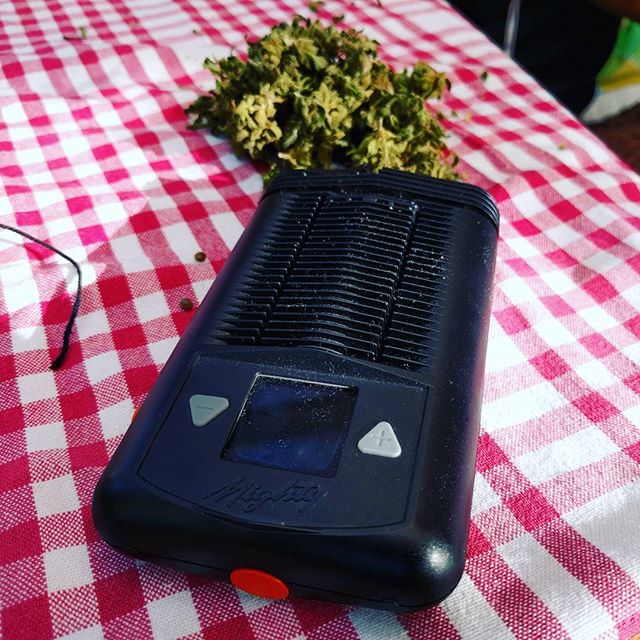 Vaping weed can be done in different ways. Some of the earliest adopters vaped weed with a light bulb, which is something I don't recommend doing because it comes with its own set of health risks.

The most straightforward way to vape weed is with a dry herb vaporizer that's specifically designed to vape weed.

A dry herb vaporizer works through the following 3-step process:

The 5 Biggest Benefits of Vaping Weed Compared to Smoking It

The biggest benefit of vaping your weed, instead of smoking it, is related to health.

1. Vaping Weed instead of Smoking It Reduces Your Exposure to Harmful Compounds

Burning plant material creates a multitude of compounds that are harmful to human health. By vaping you reduce your exposure to these compounds significantly.

But this doesn't mean that vaping marijuana is 100% safe. Vaping doesn't reduce your exposure to harmful compounds completely. By vaping your marijuana you'll still get exposed to a small fraction of the toxic by-products that you would've gotten exposed to if you smoked.

How much vaping exactly reduces your exposure to harmful compounds remains unclear, but research of Public Health England, an executive agency of the Department of Health and Social Care in the United Kingdom, estimates that e-cigarettes can be up to 95% less harmful than smoking tobacco (11).

While they didn't specifically study marijuana vapor vs marijuana smoke, one study found that cannabis smoke contains over 111 toxic byproducts that weren't present in cannabis vapor (12).

Although prevention is key in health-related matters, if you already have respiratory issues caused by smoking marijuana, getting a quality vaporizer could be the solution, and here is why:

It's important to note that when you vape at a temperature above 392°F(200°C) you risk inhaling benzene and other toxic by-products (14). Less than smoking, but still more than you would, staying below 392°F(200°C).

It's also important to note that if you get a vaporizer from an unregulated market or unauthorized dealer, you risk getting clones or vaporizers with very low-quality and sometimes even dangerous materials, like lead solderings near the heating element. Inhaling lead is extremely toxic. When buying a vaporizer always make sure that you get it from an authorized dealer!

Also, read up on vaporizer safety before buying a vaporizer.

2. Vaping Weed is Cheaper than Smoking It

This might sound strange, but getting an ‘expensive' vaporizer will actually save you large amounts of money in the long run. This holds especially true if you're a heavy user.

The two biggest factors that make vaping weed cheaper than smoking it, are:

With a vaporizer, you will use less herb to get the same level of medication.

Over a period of a few years, this can add up to thousands of dollars (depending on how heavy of a user you are). Generally, it's safe to say that you will use at least twice as little cannabis to achieve the same effects as smoking it

What’s more, vaporizing cannabis at the right temperature, leads to an even higher concentration of cannabinoids as found in a 2007 study (16).

A higher concentration of cannabinoids not only increases the protective qualities of your vapor but also gives you more value for your money.

3. Get a Cleaner Taste

Although smoking pure marijuana tastes well, with a vaporizer it's much easier to taste all the subtle differences in flavor between different strains.

Because there are almost no toxic by-products, the taste is purer and cleaner.

Plus, you can really control your flavor with the temperature settings of your vaporizer, really fine-tuning your vaping experience.

Terpenes are the compounds that give different cannabis strains their unique taste and smell. Most terpenes have a low boiling point. If you keep the temperature setting of your vaporizer between 320°F(160°C) – 356°F(180°C), you will get a much stronger and cleaner flavor than smoking can ever possibly give you.

4. Your Clothes and Room Won’t be Stinking of Smoke

One thing that I absolutely hate about smoking is the smell it leaves you with.

Especially in a confined space like a living room, over a longer period of time, smoke can ruin furniture.

One benefit of vapor is that it dissipates 10 times faster into the air than smoke.

Smoke keeps lingering around for days in your clothes and furniture. Tar, which is a by-product of burnt plant material, sticks on surfaces and fabrics, and if not removed can stay there for years.

Vaping weed still produces a smell, but it's significantly less than smoking.

Don't you hate it when someone is puffing his cigarettes right next to your face?

Besides the fact that it's annoying as hell, it's extremely unhealthy as well.

As it turns out:

If you vape your weed, you won’t be poisoning anyone with second-hand cannabis smoke (17).

This is especially important if you smoke at home.

Because in a confined space like a house room, the effects of second-hand smoke are even more disastrous for your health, but more importantly the health of your loved ones.

The Downsides of Vaping Cannabis Compared to Smoking It

Vaping Gives You a Different high

It's true that vaping doesn't give you the exact same high as a joint or big hit from a bong.

Smoking has a stronger (not necessarily better though!) effect on the body and the mind, giving you the typical sludgy lethargic feeling.

It's that well-known feeling of tiredness, that in some cases keeps you locked to the couch.

One possible explanation for this is that with smoking you absorb a lot of toxins that have a negative effect on your body and mental state but give you a ‘buzz' that you might mistake for the ‘high'.

According to most users vaping weed gives you a much cleaner high, a high in which you are not numbed and glued to your couch.

Instead, you will experience a high where you feel more energetic, clean, and stimulated.

What’s more, when you choose the right vaporizer, the potency and density of your vapor will be so strong that you will get very strong effects, except in a much cleaner and clear-headed way.

Vaping Gives You a Different Taste

It's also true that low-quality vaporizers, or more generally, vaporizers making use of low-quality materials suboptimal for vaporizing,  alter the taste of your weed in a negative way.

High-quality vaporizers on the other side will give your marijuana a much cleaner and flavorful taste than smoking.

With a high-quality vaporizer, you will taste all the delicate and subtle differences in flavor between strains, and you will be able to pick the strain which tastes the best.

How long it takes to use your vaporizer is highly dependent on the vaporizer you have.

If after reading this post, you want to try vaping marijuana instead of smoking it, I suggest you get a safe vaporizer with a proven track record in one of these articles:

Because vaporizers truly can be a technical jungle for any cannaseur new to vaping (in my opinion you can't be a real cannaseur if you're not vaping…but that's a discussion for another time).

This guide is your machete, with which you'll clear up the technical jungle and only the bare essentials will be left…so no vaporizer will have any secrets left for you.

If you want to keep smoking (which I don't recommend), then at least get a bong to significantly filter toxins with water. For a list of the ones we currently recommend read the following article: