Today, you’re getting a list of the best full-spectrum CBD oils that you can currently buy.

Let me start by saying:

Full-spectrum CBD oils are the most effective CBD products, period.

The two most important metrics for rating full-spectrum CBD oil are:

‘Full-spectrum’ means that the oil contains the full spectrum of cannabinoids and terpenes. But only those that are naturally found in hemp plants.

A true full-spectrum CBD oil has:

the more ‘full-spectrum’ a CBD oil is.

When rating full-spectrum CBD products, the cannabinoid- and terpene-profile have the most weight. Even more so than in our regular CBD oil reviews.

Some people should avoid THC altogether. But most people benefit from having small concentrations of THC inside their CBD product. This is because it’s likely that CBD and THC have synergistic effects (1, 2). 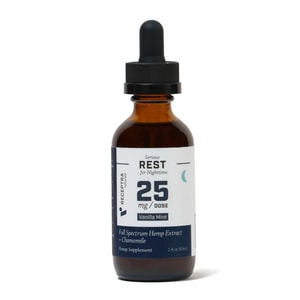 While all Receptra Naturals CBD oils score very high on both full-spectrum ratings:

We can’t but conclude these are the absolute best full-spectrum CBD oils.

The CBD to other cannabinoids + terpenes ratios are as follows:

All these metrics are significantly higher than the average of our reviewed products.

But also, when it comes to other review metrics like:

Every Receptra Naturals product comes with a QR code that links to a third-party lab-test report. Inside this report you can find all test results for that specific production batch. These are full-panel tests, including heavy metals, residual solvents, pesticides, and microbiological tests.

It doesn’t get more transparent than this.

Looking at how much CBD you get per dollar, Receptra Naturals products are less affordable than the average.

But when you take into account minor cannabinoids and terpenes, you get more than the average.

Also, you can’t compare the price of a full-spectrum product like this one to most CBD products.

It would be like comparing a vitamin C pill (the average CBD product) to blueberries. Blueberries (this oil) contain vitamin C, plus hundreds of other beneficial compounds.

The next option on the list, however, will provide even more value per dollar. 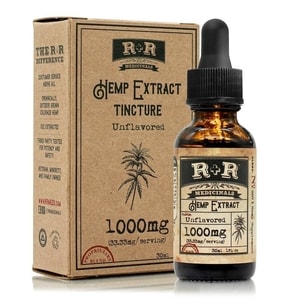 Pound for pound, R+R Medicinals is the best value-for-money CBD brand out there.

When it comes to full-spectrum CBD products…

There are no brands that provide more ‘CBD + minor cannabinoids and terpenes per dollar' than R+R Medicinals.

Let’s take a look at the numbers.

R+R Medicinals full-spectrum CBD oils come in three strengths. But we are only interested in the 1000 and 2500mg strengths (the middle and the highest strength).

The number of terpenes and cannabinoids in these oils is higher than in most other oils.

The CBD to other cannabinoids + terpenes ratios are as follows:

This is lower than, for example, with Receptra Naturals products. But it’s still significantly higher than the average.

When we look at the terpene-profile we see the following:
It has a high concentration of terpenes. And many different terpenes.
Terpenes are only present inside the flower parts of the hemp plant (4). So we can conclude this product is mostly made from the flower parts.

When it comes to transparency, R+R Medicinals is as transparent as it gets. Every product comes with a QR code that links to a batch-based lab-test report. Inside the report you can find the usual: cannabinoid-profile, terpene-profile, and contaminant tests.

Price is where R+R Medicinals full-spectrum oils shine. You get almost double the amount full-spectrum CBD compared to other premium brands.

Especially when you get the stronger 2500mg bottle, the value is insane. With that bottle, you get 25.7mg CBD per dollar (the average is 14.6mg). And keep in mind that this 25.7mg CBD is within a full-spectrum context. 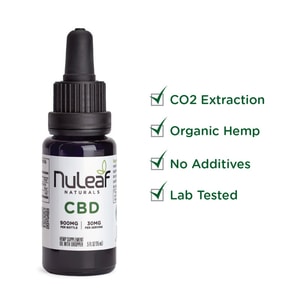 NuLeaf Naturals is one of the most trusted brands in the CBD world.

It’s one of the older CBD brands. They’re active since 2014. Ever since, they have a trustworthy reputation as a full-spectrum CBD brand.

Full-spectrum cannabinoid products are literally all they sell.

I can only speak good about it.

Every NuLeaf Naturals cannabinoid product comes with many cannabinoids and terpenes.

Their products always come with consistent cannabinoid- and terpene-profiles. It's consistency across time, across batches, and across products. NuLeaf Naturals is a very consistent brand.

Let’s take a look at the stats of their full-spectrum CBD oil:

The variety of cannabinoids and terpenes is a bit lower in this oil compared to the previous options.

You have to keep in mind that this oil probably contains a lot more compounds that are either:

But the same holds true for the other oils on the list.

When we look at how many minor cannabinoids and terpenes you get per 1mg of CBD, we can see the following ratio:

This is around the average for true full-spectrum oils.

There are oils that have more minor cannabinoids and terpenes per mg of CBD than NuLeaf Naturals oil. But a lot of them have added isolated cannabinoids.

Products that are a combination of isolated cannabinoids are not truly full-spectrum. Why? Because they don’t contain hundreds of other compounds that are present in hemp flower.

Transparency-wise NuLeaf Naturals is as transparent as it gets:

Third-party lab-test reports with full-panel testing for every production batch.

When we look at price we can see that NuLeaf Naturals is a bit more expensive than the average. Unless you get their bigger 3000mg or 6000mg bottles. 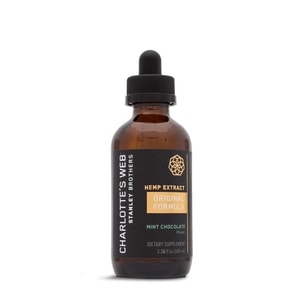 When it comes to their full-spectrum oils, you have two different options:

Charlotte’s Web themselves classify their ethanol-extracted Original Formula as a terpene-dominant oil. And their CO2-extracted 60mg CBD/1ml as a cannabinoid-dominant oil.

So, which one of these oils is the better full-spectrum oil?

You first have to understand the importance of cannabinoids relative to terpenes.

But that doesn’t exclude terpenes from having an important role in cannabis plant synergy (3).

The cannabinoid-profile has more weight in rating a full-spectrum oil. But terpenes have a lot of weight as well.

The cannabinoid-profiles of both products are similar. The terpene-profile is what differs.

it’s likely that the Original Formula contains more terpenes than the CO2-extracted oil.

Both products have a similar cannabinoid-profile. Terpenes give the edge to their Original Formula oil.

Let’s look at the stats.

This is the oil with the most different cannabinoids in detectable levels.

Nonetheless, the stats don’t lie. Based on the lab-test reports, this oil has the widest cannabinoid-profile.

To calculate the ‘full-spectrum ratio', we gave this oil an average terpene content of 0.2%. We don’t know the true terpene-content, but 0.2% is around the average for most true full-spectrum oils.

It has a ratio of:

This is slightly above the average. Keep in mind that there’s a chance we’re underreporting the terpene-content and this ratio is even higher.

Transparency-wise Charlotte’s Web is almost as transparent as it gets. The only thing that’s missing from their lab-test reports is the terpene-profile.

You get 17.65mg CBD per dollar and 3.1mg of minor cannabinoids and terpenes per dollar. 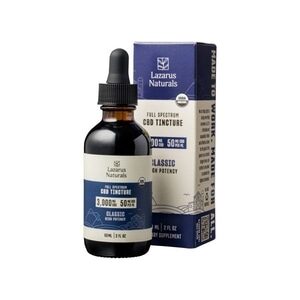 They are more than a bunch of isolated cannabinoids put together. How can we verify this? By checking the cannabinoid- and terpene-profile. If an oil contains cannabinoids like CBC and CBT, it’s likely that it’s truly full-spectrum. Generally, these are not cannabinoids used to bolster CBD products.

If a product contains hemp-derived terpenes, it’s likely that it’s a true full-spectrum product as well.

You can look for terpenes like humulene, linalool and myrcene.

Terpenes can be added later to make the product look like a true full-spectrum product. So it's not a foolproof method to verify whether a product is full-spectrum. Always check the cannabinoid-profile as well.

Let’s look at the stats of their high potency full-spectrum oil:

When we look at how many minor cannabinoids and terpenes you get per 1mg CBD, we see the following:

For every 1mg of CBD, you get 0.15mg of minor cannabinoids and terpenes.

This is around the average.

The ratio of CBD to minor cannabinoids + terpenes is lower than the other oils on the list.

Yet, where it more than makes up for it is value.

Lazarus Naturals is one of the best value-for-money CBD brands.

As you can see, this is even better value than you get with R+R Medicinals oil.

You could argue that Lazarus Naturals is the best value for money CBD brand. We rate R+R Medicinals higher because their oils have a wider cannabinoid- and terpene-profile.

As explained, when rating CBD products, the:

have the most weight in the final rating. And R+R Medicinals scores better on those metrics than Lazarus Naturals.

That said, you can’t go wrong with Lazarus Naturals either.

Regular CBD oil usually refers to an oil that only contains CBD.

As you know, the hemp plant contains a multitude of beneficial compounds.

Regular CBD oil only contains an isolated form of CBD.

You can compare regular CBD oil to a vitamin C pill, and full-spectrum CBD oil to blueberries. Blueberries contain vitamin C, but also hundreds of other beneficial compounds.

Is Full-Spectrum CBD the Best?

We KNOW that full-spectrum CBD is the most effective way to take CBD.

But studies show that isolated plant-compounds never have the same effect as the complete spectrum of compounds inside a plant (5, 6).

Some studies have found something similar when it comes to CBD.

Other studies show that cannabinoids produce an ‘entourage effect'. They create unique effects when combined. Effects that wouldn't be present when taking the cannabinoid alone (8, 9).

But the synergistic effects of cannabis compounds aren't only between cannabinoids.

Some studies suggest that terpenes have an important role in cannabis plant synergy as well (11).

For most people, a cannabinoid-, terpene-rich full-spectrum CBD oil will be most effective.

Who Should Avoid Full-Spectrum CBD Oil?

Anyone that wants to avoid THC should avoid full-spectrum CBD oil.

And while small amounts of THC improve the effectiveness of CBD products, some people are:

In both cases, it would be best to avoid full-spectrum CBD products.

Even though full-spectrum CBD products contain only little THC…

When taken regularly over long periods of time, this small amount can be high enough for you to fail a drug test.

If you take a full-spectrum CBD oil and you start feeling a buzz or other side effects like:

it's very likely that you're highly sensitive to THC.

The best option for these two categories of people is broad-spectrum CBD oil.

Broad-spectrum CBD oil is THC-free. But it contains other hemp-derived cannabinoids and terpenes that act synergistically with CBD.