Maybe you’re still on the fence about dry herb vaping, and you’re not sure whether it’s safe or not.

Or maybe you’re a vaping geek like me, and want to understand the technicalities of dry herb vaporizers.

Plus, once you understand how a vaporizer works, you will more confidently make the switch from smoking to vaping

A dry herb vaporizer is a device used to vaporize and release the active compounds inside dry herb.

With a dry herb vape, you can inhale the active compounds, without inhaling many toxic by-products that would otherwise get released from burning plant material.

When it comes to cannabis, the most well-known active compounds are THC and CBD.

But there are many other active compounds, including:

But a dry herb vaporizer can also be used to vape active compounds of other herbs.

There are various types of dry herb vaporizers.

They can be categorized as follows:

In essence, all types work the same:

They release the active compounds inside your dry herb without releasing a large amount of toxic by-products.

But the exact heating mechanism responsible for this process can differ per type of vaporizer.

How Does a Dry Herb Vaporizer Work?

A dry herb vaporizer heats up your herb up until the active compounds inside it start boiling. But with a huge benefit: they don’t burn your dry herb.

So how exactly do these different types of vaporizers work? 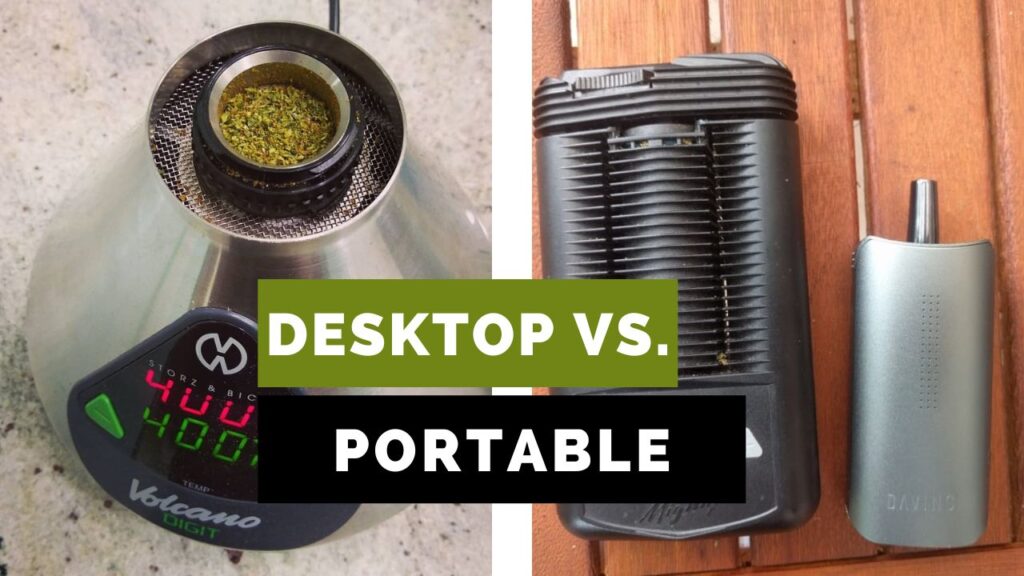 The most important thing to know is that:

This difference in heating mechanism makes it so that the most desktop vaporizer work slightly different than portable vaporizer.

What this means for you is that desktop vaporizers generally produce slightly better-tasting and smoother vapor than portable vaporizers.

But more on that in the next paragraph where we talk about convection vs conduction vaporizers.

Also, desktop vaporizers hit harder and have much better extraction-speed than the average portable vaporizer.

Because they work with an electrical outlet instead of a battery.

Conduction vaporizers work by means of heating a surface that’s in direct contact with your dry herb.

With a conduction vaporizer, you’re literally frying your dry herb.

Convection vaporizers work by means of heating air. This air then gets pulled over your dry herb.

With a convection vaporizer, you’re baking your herb. It’s similar to a hot-air oven.

So almost all portable convection vaporizers also have some form of radiant and conduction heating going on.

In practice, this difference in how the heating mechanisms works, translates into better-tasting vapor for desktop vaporizers.

Because 100% convection vaporizers (which is only possible with desktop vaporizers) generally taste a bit purer and smoother.

Read more about this topic: 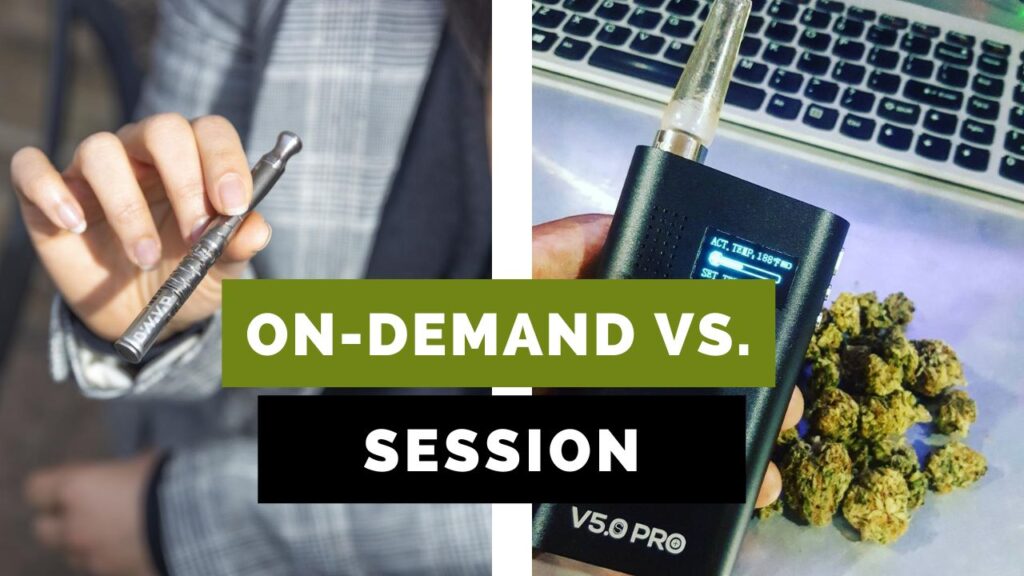 An on-demand vaporizer only heats up your dry herb for as long as you keep it on. It gives short, but intense bursts of heat.

A session vaporizer needs more time to heat up. And once it’s hot, it heats your bowl continuously. A session usually lasts between 5 and 15 minutes.

Most desktop vaporizers are session vaporizers, but because they’re so big, usually there’s some distance between the heating element and the bowl. This means that they almost function like on-demand vaporizers:

They mostly heat your dry herb, when you pull hot air inside the bowl. So even though the heating element is on continuously, it doesn’t lead to as much continuous cooking of your herb like with a portable vaporizer.

Because portable vaporizers are so small, there’s never much distance between the heating element and the bowl. Any time you heat up a portable vaporizer, there will be some continues cooking. It doesn’t matter if the vaporizer is on-demand, convection-based, or both.

The main reason for this is because on-demand vaporizers only heat your herb for 10-20 seconds at a time, while you’re drawing vapor.

Session vaporizers continuously cook your herb, whether you’re drawing vapor or not.

Most dry herb vaporizers are electronic.

They either work with a battery (portable) or with a connection to an electrical outlet (desktop).

You turn them on, and they start heating.

These can be both conduction- or convection-based.

With a conduction + butane-powered vape, your herb is encapsulated in a wooden, ceramic, steel, or glass bowl. And how you heat it up is torching the bowl.

With a convection + butane powered vape, you heat up air inside a channel and pull it over your herb while you’re torching this channel.

Because a torcher can produce much more heat in a much shorter time than a battery (portable vaporizers), and even an electrical outlet (desktop vaporizers).

Although in essence, all dry herb vaporizers work the same:

They heat up your herb up until the point the active compounds start boiling, without burning it…

The exact process as to how this is achieved, can differ based on whether the vaporizer is: