Most beginners think that dry herb vaping is expensive.

But here's the truth:

A dry herb vaporizer doesn't have to cost more than $100. You can even get started with just $60.

Today you're getting the best affordable dry herb vaporizers with a price tag of around $100 or lower.

We rated these vaporizers on the following metrics:

Quickly go to the…

Comparison of the Best Affordable Vaporizers

#1. Planet of the Vapes ONE 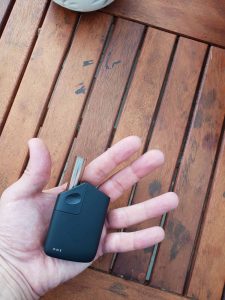 After reviewing hundreds of vaporizers, including many cheap ones, we've come to the following conclusion:

The POTV ONE is the best vaporizer under $100.

When it comes to rating vaporizers, at Herbonaut, we most value:

On all four of these metrics, the POTV ONE scores high.

But especially when it comes to extraction speed and vapor quality, this vaporizer is as good as mid-range vaporizers costing around $200.

Yes, the POTV ONE extracts fast and hits hard. Not only is this remarkable because of its modest price tag…

But it's also remarkable because of its size. The POTV ONE is a true pocket-vape. It easily fits inside your pocket without it feeling like a burden. Added benefit of its small size: it's a discreet vape.

One downside of most hard-hitting small vaporizers is that the vapor gets harsh very fast, which makes the vapor quality suffer.

But the POTV ONE keeps the vapor acceptably cool in the low- to mid-range temperature settings. Only once you set the temperature above 392°F(200°C).

And for those high temperature settings there's an easy solution:

Just get the mini-bubbler that's specifically designed for this vape, for a measly $10.

Using this bubbler, you'll be able to crank up the temperature to the highest settings, without inhaling harsh vapor.

Aside from the persistent manufacturing smells when you just start using this vape, it's also a safe vaporizer.

It's made from high-quality materials:

Also the air-path is isolated from the electronics.

And the persistent manufacturing smells come from the plastic part in the mouthpiece. This smell can be undone by cleaning it well and do a few proper burn offs before you use your POTV ONE.

The only other downside worth mentioning is that the battery life isn't great (30 minutes). And it isn't replaceable. This can lead to issues if you use the ONE for longer periods, while you're away from an electrical outlet.

If you can live with this though, this is the best electronic vaporizer under $100. 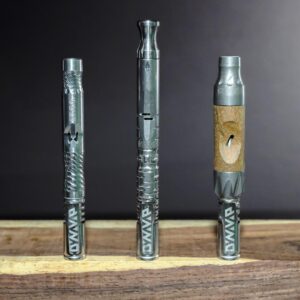 You can't get a better vaporizer under $100 than the VapCap M.

The problem is that many people don't enjoy using butane torch lighters. And the problem with the separate induction heater is that it takes away from the portability of the VapCap M.

That said, using a butane torch lighter isn't all that bad.

A lot of VapCap M users, including me, come to enjoy the whole ritual of torching their VapCap M. It's almost like lighting up a joint (but without the smoke).

What do you get if you're OK with the VapCap M's heating mechanism?

You get one of the hardest hitting portable vaporizers, period.

This small little vape hits even harder than portable vaporizers with a price tag of $200+.

It can extract a full bowl of 0.1 grams herb, with less than 10 good rips. That's how fast it extracts.

And the best part?

The vapor is smooth and packed with flavor. Only if you heat past the midpoint of the tip, near the open end of the cap, does the vapor get harsh.

One huge safety-related benefit of this vaporizer is that it has no heating element.

All of the VapCap M is stainless steel.

Your torch heats the stainless steel bowl, and the bowl heats the herb.

With the VapCap M, there's no such risk.

One downside of this vape is that the temperature control isn't precise at all. It's based on where exactly you put the torch. But you don't really know what temperature you're vaping at.

In practice, this isn't that big of a deal.

The VapCap M is the best affordable dry herb vaporizer you can get. 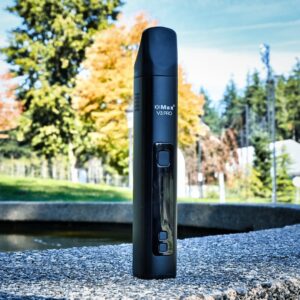 It's the XMAX V3 Pro Vaporizer.

It's extraction-speed is a bit lower. It doesn't hit as hard as the POTV ONE.

Another benefit of this affordable vape compared to the POTV ONE is that its battery life is better. Plus, it has replaceable batteries. So the battery situation is better from two important aspects.

How long is the XMAX V3 Pro's battery life really? It's around 30-40 minutes, depending on whether you use on-demand or session mode. On-demand mode results in a slightly lower battery life.

What's the difference between on-demand and session mode?

When it comes to the XMAX V3 Pro, there isn't much difference between these two modes.

In both cases, hot air only gets pulled over your herb when you actually draw.

That said, since this is a relatively small portable vaporizer, as long as the heating element is on, there will be some radiant and conductive heat present.

Theoretically, in session-mode, your herb will be exposed to a bit more heat than in on-demand mode. But this only holds true if you take pauses between your hits. Plus, I didn't see any difference in coloring in the herb, using both session- and on-demand vape for a continuous 10 minutes. This indicates if there's any inefficiency going in session-mode, it's not very significant.

Actually, whatever mode you use…

When it comes to affordable vaporizers, the XMAX V3 Pro belongs in the top 3. You could even argue that it's the ‘best' cheap dry herb vaporizer. Choose the XMAX V3 Pro over the POTV ONE if you value swappable batteries and a vapor quality more than extraction-speed. 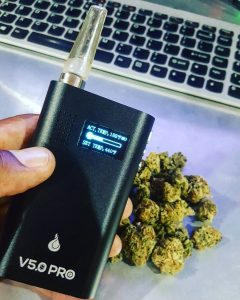 Only after those years, did better vaporizers come out.

But that doesn't mean the Flowermate V5s is a bad vaporizer. It's still a great affordable vaporizer.

It's a bit bigger than the other vapes on the list.

But it's still really portable and looks somewhat discreet with that box mod vape look.

Of all vaporizers on the list, this one has the best battery life.

This vaporizer has the best battery life of all portable vaporizers I've ever tested.

It's very easy to use. There's no learning curve involved. It's got a large bowl, so isn't good for micro-dosing. But that makes all the better for sharing it with friends.

It's got the same ease of use and large bowl, making this vaporizer very easy to share with friends.

It also has a precise temperature control system, if you really prefer to fine-tune your temperature to exact degrees in the single digits.

A few downsides of this vaporizer:

Its vapor quality is lower than other options on the list. And because it's a pure conduction and session vaporizer, its efficiency isn't the best either.

This vaporizer will really continuously cook your herb, whether you're drawing or not.

On the performance-based metrics like extraction-speed and vapor quality, it doesn't score as good as the options on the list.

But the FM V5s is a good vaporizer for its price point. It's the absolute cheapest option on the list. It’s very portable, discreet has insane battery, is very easy to use and performs decently. 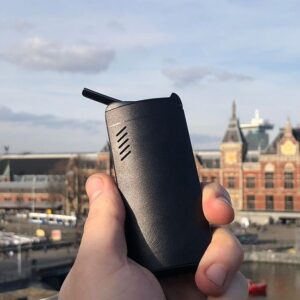 And the XMAX Starry isn't any different.

It's high-quality budget vape that excels on the following points:

Being a 100% conduction vaporizer, it's also less efficient than the other options on the list (the FM V5s excluded). It has a big bowel and needs a good amount of herb in it to produce satisfying hits. So this vape isn't suited for micro-dosing. It's great for long sessions and sharing with friends though.

The XMAX Starry is made from the same materials as mid- and high-tier portable vaporizers:

No plastic or silicone inside this vaporizer. It also has an an air path that's isolated from the electronics.

Taking into consideration the following:

we have to conclude that the STARRY is one of the safer options on the list. Theoretically, only the VapCap M may be safer because it has no heating element at all.

If you're looking for an affordable session-based hard-hitter, and don't mind the muted flavor 100% conduction vaporizers give…

Get the XMAX Starry.

While these vaporizers are good, if you want more power, more reliability or better flavor, and you're ready to spend a bit more…