Today you’re getting a list of the best bongs that you can currently get.

Over the years, we've reviewed countless bongs and rated them on metrics like:

Whether you’re looking for an exclusive bong with all the bells and whistles (percolators, ash catchers, thick ass glass), or a super-simple but effective bubbler for your dry herb vaporizer or wax pen…

Every bong in our list has a unique strength. 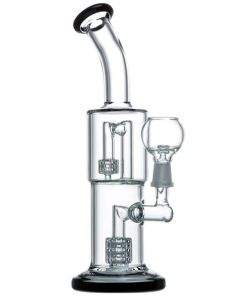 If you don’t want to spend more than $100, you can get a lot of well-priced well-functioning bongs that are designed similarly to expensive designer bongs.

But there’s a catch:

The quality of these ‘clone’ bongs isn’t consistent. When getting a ‘clone’, sometimes you get amazing quality bongs, other times, if you’re not careful, you risk getting, a cheap, but also a low-quality bong with thin glass or lesser quality welding.

What matters even more though than your type of percolator in how strong your bong diffuses is the following: the number of percolators.

Generally speaking, the more percolators spread through your bong, the:

The inverse is true for when there are fewer percolators spread through your bong. The Stereo Matrix comes with two matrix percolators. So it produces relatively smooth hits with little draw-resistance, but the hits can be bland in terms of flavor when vaping or dabbing.

While the original Stereo Matrix bong costs over $400, you can find great quality imitations for under $100. But as mentioned, you need to make sure you get your bong from a reputable supplier.

Over the years, a few suppliers in the U.S. and China emerged as being trustworthy and providing quality bongs for a modest price. Two of them in the U.S. are Dankstop and SmokeCartel. One of them in China is ‘Steven’ on dghate.

Dankstop and SmokeCartel bongs are slightly pricier than the bongs found on dhgate, while they're of the same quality. But the benefit of ordering from these shops is that you get quick shipping and quick U.S.-based customer service in case anything goes wrong with your purchase.

This bong works especially good for flower and decently for vaping and dabbing. But if you’re looking for a bong that truly excels for either vaping or dabbing, take a look at the next bongs. 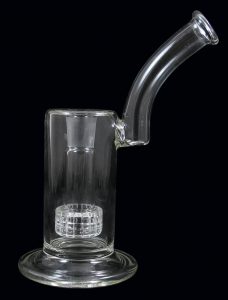 For vaping, you won’t need the filtration aspect of a bong as much as the cooling aspect. Vaping cannabis itself can already reduce the toxins that you find in smoke up to 95%, but vapor can still be high-temperature and harsh on the throat.

And although large bongs are better at cooling down smoke/vapor, they also filter and dilute the flavor more than smaller bongs.

Add to that the fact that the bigger the surface area of your glass, the more vapor will condense on the glass (leaving less vapor for you to inhale), and you’ll quickly understand why the most practical option for a vape bong is a compact bubbler instead of a large bong, with at most a lightly diffusing percolator.

But getting too small of a bubbler/bong isn’t practical either. With the really small bubblers/bongs, you risk splashing water in your mouth.

We’re looking for a compact bong, that isn’t so small that it’s constantly splashing water in your mouth.

There are different bongs/bubblers that qualify as great vape bongs, but the ones we like the most are the models that are similar to the D020-D bubbler found on dhgate from Sunshinestore.

What we like most about the D020-D bubbler is:

The D020-D is not too big, you won’t give your vapor time and space to condense on the glass in large quantities. But it’s also not too small. If you don’t overfill it with water, you won’t ever have to worry about water splashing in your mouth.

And you’ll quickly understand why we crown the D020-D as the best bong for vaping.

As explained before, you have to be careful who you buy from on dhgate, but Sunshinestore has been around for 4+ years and with over 1000+ positive reviews, they have shown that their products and customer service are as good as it gets for a dhgate supplier.

SmokeCartel sells a similar model, that’s a bit more expensive. You decide if ordering from a U.S.-based online store is worth the extra price.

Thick Beaker Bong with Down Stem (Best for Flower) 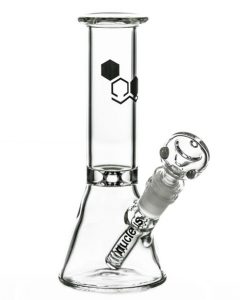 Smoke is hot and dirty. To filter and cool smoke down properly you need a longer travel-path and more diffusion than you would need for vapor for example.

This diffusion can be either in the form of percolators, a diffuser downstem, a beaker bottom, an ash-catcher, or a combination of these options.

To get your specific best flower bong, it helps to ask yourself a few questions though:

That said, we think the best bong purely for smoking flower is a thick beaker bong with a good down stem, and if you want even more diffusion and cleaning convenience: an additional ash catcher.

In a setup like this, you won’t have any percolators, but they won’t be needed because the nature of a beaker bong with a down stem is such that it diffuses possibly even better than a straight shooter bong with percolator setup. Now, add to that an additional ash catcher, and you got a bong that not only diffuses better than most straight shooter bongs with a percolator setup but is MUCH easier to clean and maintain as well.

Any thick beaker bong with a good down stem will work, but if you’re looking for specific recommendations these are the models, we like the most: 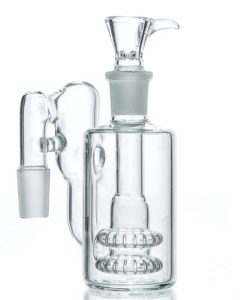 Dabbing in a sense is similar to vaping. Dabs are quite clean in and of themselves and don’t need a lot of filtration. What dabs do need though is a lot of cooling because dabs tend to get hot.

Dabbing, just like vaping, loses flavor quicker than smoke when being diffused either through percolators or the mixing with air that comes with large-sized bongs.

Just as with vape bongs, if you’re looking for a dab-bong, you would do best to limit your options to the smaller-sized bongs.

But since dabs are of a higher temperature than vapor, the cooling down aspect of a bong is more important when dabbing compared to vaping.

How can you combine small and compact size, great cooling, and little to no diffusion? Recyclers!

Percolators generally don’t work well because most of them work also as strong diffusers and will dilute the taste of your dabs too much.

But recyclers aren’t diffusing much. All they do is give your dab-smoke more time with the water and make the bubbles of dab-smoke pop closer to your mouth, which in fact can give you more flavorful hits than a regular bong (bong without recycler).

Now, as with any ‘type’ of bong, you also have a lot of great options if you’re looking for a small and compact bong with a recycler.

But if you’re looking for specific recommendations, these are the models we like the most:

All of these models are small, compact, and come with a very effective recycler design.

The age-old debate of which type of bong is better: a beaker bottom, or a straight shooter?

Well, this all depends on what you value more.

If you like smooth hits and want slightly more draw resistance, a beaker bottom will be slightly better.

If you like fast and clean rips with little to no draw resistance, a straight shooter will be slightly better.

Of course, how smooth your hit, how much draw resistance you’ll have, or how clean and fast you can take hits, is dependent on more things than your bong being a beaker bottom vs. a straight shooter. The bong’s design, the types of percolators, the number of percolators, ash catchers, recyclers, water-levels, all have an influence on your bong experience.

That said, all other variables kept equal, a beaker bottom will have more natural diffusion, filtering, and cooling, but a straight shooter will give cleaner rips and provide a bit fuller flavor.

Is there really much difference between all the different types of percolators?

Well, not that much.

All serve the same purpose: diffusing and filtering your smoke/vapor/dab.

That said, some types of percolators break the water and smoke up in smaller particles than others.

Honeycomb percolators, for example, have the tiniest holes generally, so they diffuse/filtrate more effectively. The downside of this effective diffusion and filtration is that the flavor will suffer.

If you’re looking for a percolator that doesn’t diffuse as effectively as a honeycomb percolator (and reduces the fullness of flavor), check out bongs with a seed of life percolator for example.

How Much Water to Put Inside Your Bong?

How much water to put inside your bong is mostly a point of preference.

That said, if you have percolators it’s important that they’re covered with water though, otherwise, they can’t percolate.

If you have a downstem or percolator I recommend starting with covering that and add more water from there, depending on whether you're satisfied with the drag and/or filtering of your bong.

Pro tip: Add a little ice cube to the water in your bong.

Heady glass bongs are for those among you that care more about aesthetics than function.

It’s not like heady glass bongs don’t function, they do. But aesthetics come first.

Heady glass bongs usually are quite expensive as they’re handmade by glass artists. I recommend checking out local stores for heady glass, as it’s important that you can see, feel and taste such an expensive piece of glass before you buy it!

Even though these bongs can be used to smoke your flower, at Herbonaut we believe vaping your cannabis is the most convenient and safest way to use it. And for that, you'll need either a dry herb vaporizer.

Marijuana smoke is harmful to your respiratory system. Some studies found that vaping can reduce your toxin exposure up to 95% compared to smoking.

If you want to look for a dry herb vaporizer, check out these posts:

If you want to learn more about vaping check out the following vaping and vaporizer guides:

If you still need a grinder for an easy way to grind your herb, check out our buyer's guide on herb grinders:

And if you want to get the best vaporizers for vaping concentrates, check out our buyer's guide on wax pens: