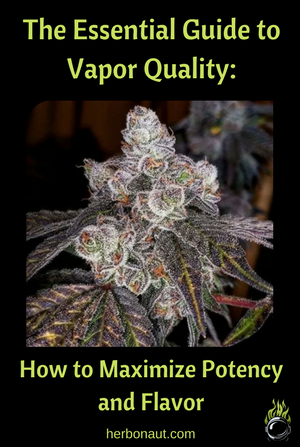 If you're interested in vaping, but think that vaping won't taste well or produce the effects you want…

You may be right. Bad vapor quality is the biggest reason beginners give up on vaping.

The two elements that make up the quality of your vapor are:

If you don't get a high-quality vaporizer or don't know how to use a vaporizer, you risk inhaling vapor of low potency and bad flavor.

In today's post, I'm going to show how you can make sure your vaporizer will always produce vapor of amazing quality.

This starts with getting the right vaporizer. But also using the proper techniques.

And if you're wondering why you should care about vapor quality, slap yourself and repeat after me:

Vapor quality WILL make or break my vaping experience.

So let's get on with it…starting first with how you can recognize a potent vaporizer.

Or go directly to the paragraph that interests you:

What Makes a Vaporizer Potent?

What You Can Do to Increase Potency

What Makes a Vaporizer Flavorful?

What You Can Do to Increase Flavor

1. The Factors That Make a Vaporizer Score High on Potency

Why do people use cannabis?

Well, the most important reason is because of the effects it produces, whether you use it medically or recreationally.

And the second-most important reason is that a lot of cannabis users are in love with its taste.

Why does this matter?

If you're vaping and want to feel the effects of cannabis, you need potent vapor.

We all know potent vapor when we see it…it's thick, it's dense, it's milky and hits like a truck. But how to technically define it? 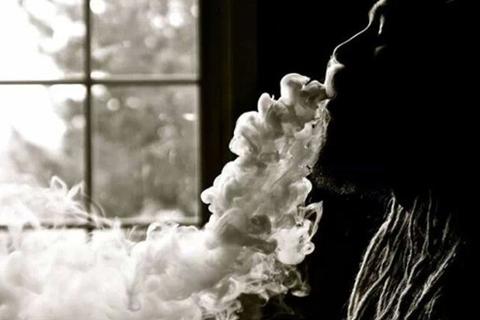 The technical definition of vapor potency is the cannabinoids-to-air-ratio of your vapor.

Cannabis has many different types of compounds, but it's primarily the cannabinoids, and to a lesser extent, terpenes, that are responsible for the effects associated with using cannabis.

What this means is:

The more cannabinoids you will have in your vapor, the stronger the medical effects of your vapor will be.

You will get medicated quicker and more effectively with potent vapor. But not every vaporizer produces potent vapor.

But here's the kicker:

I cannot scientifically measure the cannabinoid-to-air ratio of vapor.

I can measure unscientifically…how potent the vapor is, coming out of a vaporizer.

How do I do that?

Note: Keep in mind big and dense clouds don’t necessarily have a higher cannabinoids-to-air ratio, but they will hit you harder.

And if you're interested in vaporizers that produce the hardest-hitting clouds of vapor, you need to look for direct-draw, convection desktop vaporizers with a powerful heating element.

It's quite simple actually:

All these variables contribute to you getting the densest, hard-hitting clouds with the highest cannabinoids-to-air-ratio in a single draw/hit/rip.

2. What You Can Do to Increase Potency…

Some variables that have a significant impact on the cannabinoids-to-air-ratio of your vapor, are controllable by YOU!

Yes, captain obvious is here…but you’re not going to get potent vapor with low-quality weed. How do you recognize potent herb? 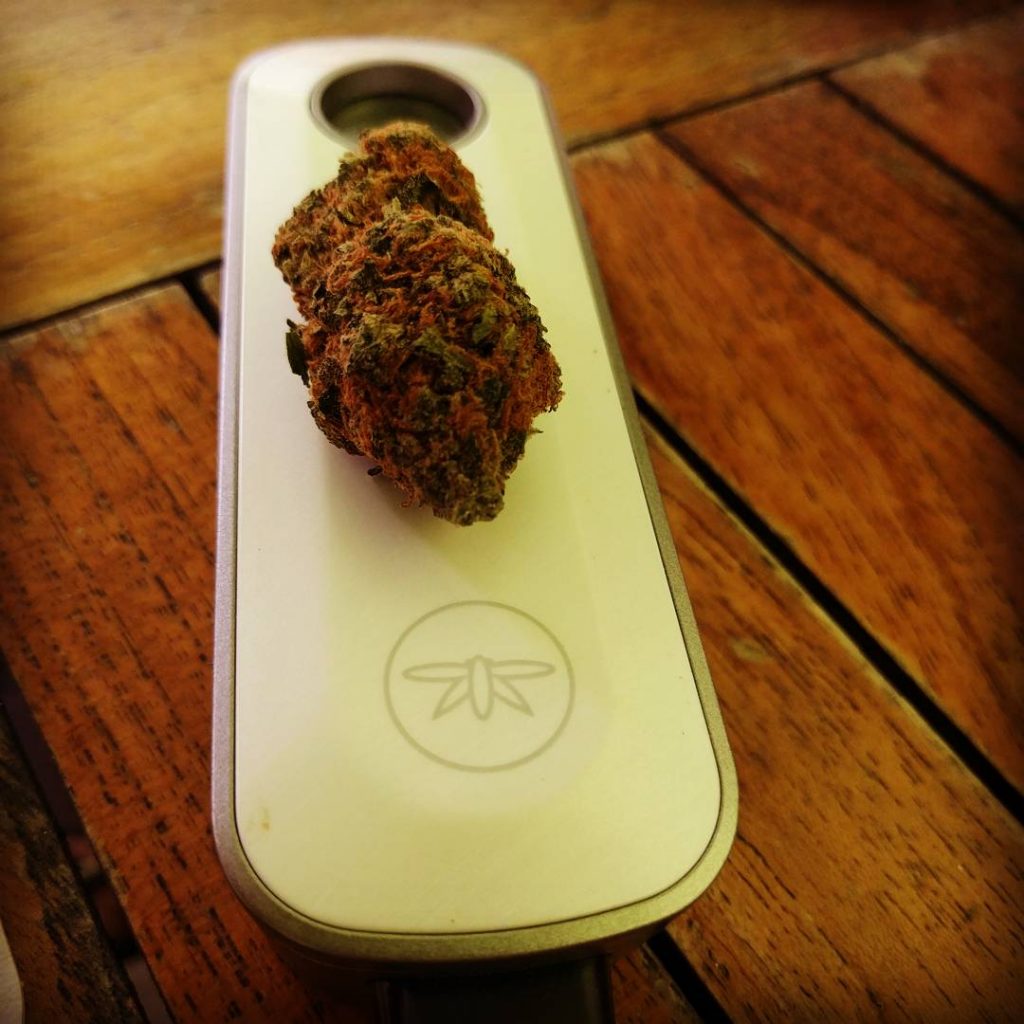 A couple of tips:

The Grind of Your Herb

Every vaporizer will have its optimal grind level. Here are a few general tips though: 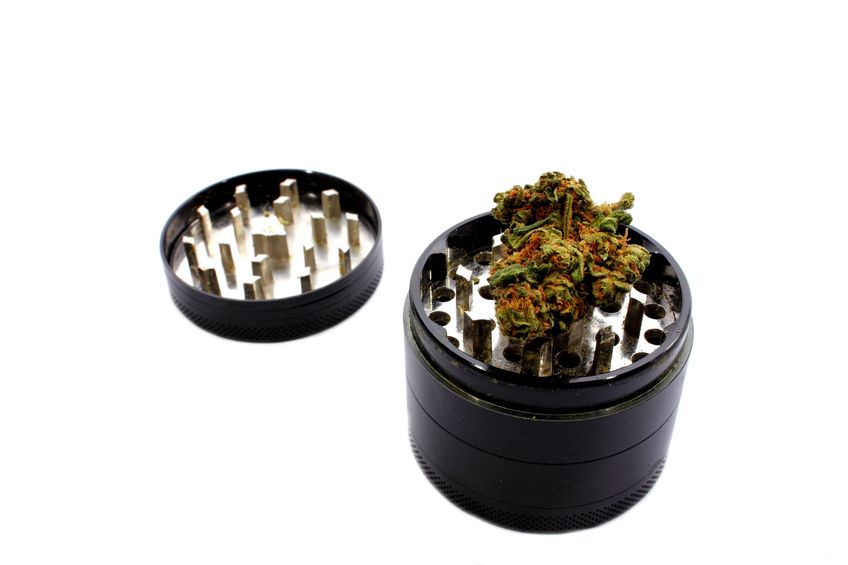 With a conduction vaporizer:

Just grind your herb as fine as possible. No concessions here.

With a convection vaporizer:

A medium to fine grind is best usually. You want all the trichomes (crystals) of your herb loosely distributed through your bowl so the hot air can permeate every single trichome on its path to your lungs.

Tip: Another method is to put your herb in the bowl unground, take a few hits, and then grind and stir it to a finer level in your bowl. The first few hits will be very tasty, while the rest of the hits will be dense.

Although the grind of your herb is the most important in using a vaporizer and potent vapor production, you should learn all the necessary tips on how to use a vaporizer properly.

Moisture hinders the vaporization process severely. The potency of your vapor will take a big hit.

Keep Your Vaporizer Fresh and Clean

Just like with your body, to keep it functioning properly and let it keep producing large and potent clouds of vapor, you need to clean your vaporizer up regularly. Don’t let any resin build up in any parts of your vapor path and especially keep your bowl and the screen in your bowl clean. 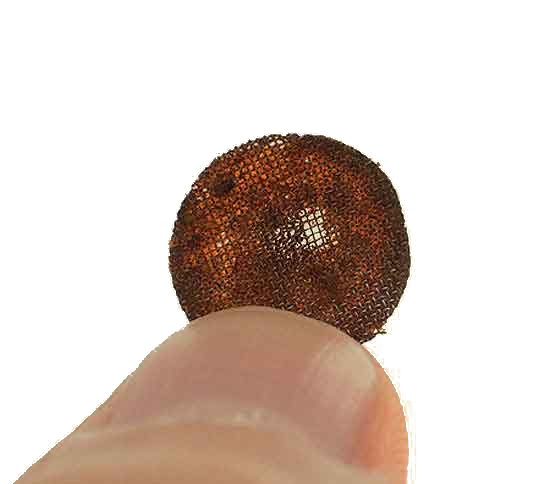 Some vaporizers are harder to maintain than others, read our vaporizer reviews to find out about each particular vaporizer.

The higher the temperature, the more potent the hit.

The higher the temperature, the harsher the hit…

If you want to go for those extremely potent hits (keep in mind: you risk getting more carcinogens in your vapor this way), get a vaporizer which can easily reach temperatures up to 446°F / 230° C, which is close to the combustion point of marijuana.

3. What Makes a Vaporizer Flavorful?

If you’re anything like me, you don’t only vape cannabis for the effects it produces…

But also for the divine taste of the beloved herb.

As a true connoisseur, you’ll want to preserve that sweet taste to the best of your ability…and let all the terpenes of your herb blast your taste buds with all their different and blissful flavors.

If you want top flavor, you need to look for these characteristics in your vaporizer:

4. What You Can Do to Increase Flavor…

There are things YOU can do (or rather refrain from doing) to keep the flavor of your vapor at a sensational level!

Maybe you’re an ex-smoker and you like to keep smoking at least a little while vaping. You got your new vaporizer, you begin your vaping journey, but the taste is just lacking.

Before you blame your vaporizer and vaping in general, please:

Give up smoking for at least 3 months! 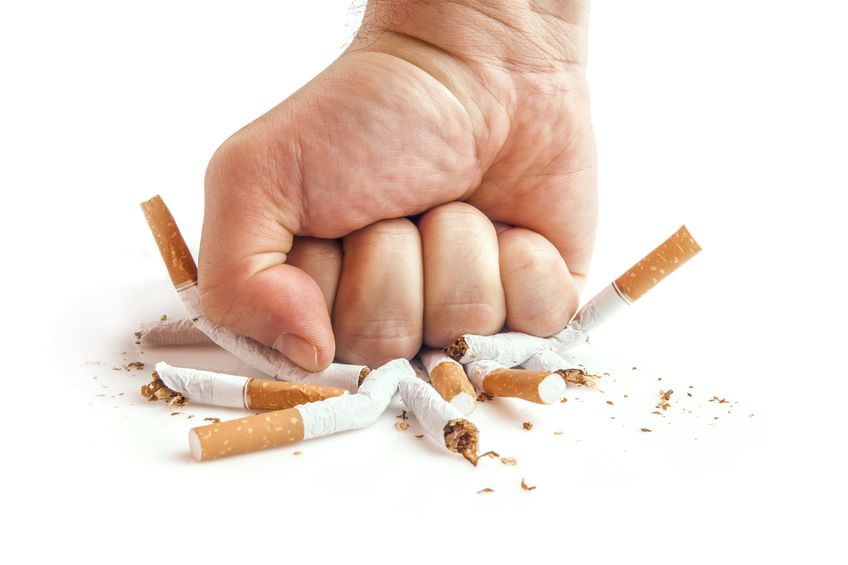 Smoking does not only damage your taste buds; it actually can kill them…and your body will need time to recover your taste buds, especially after an extended period of smoking.

Vaping above this temperature will always add a bit of a harsh taste to your vapor, of course using some sort of cooling does help…but won’t always wholly mask the harsh flavor, especially after the first couple of hits. This temperature is not set in stone. Ultimately, you will have to experiment until you find your sweet spot.

Adding Terpenes to Your Dry Herb

You've learned everything about vapor quality, what type of vaporizers produce high-quality vapor, what you can do to increase it, and some specific recommendations on vaporizers which deliver vapor of a, unusually high quality. If after this guide you still complain about vaporizers not getting you where you want because they're too weak…

…the vape gods know where to find you.