It’s the precursor of some major cannabinoids like CBD and THC.

In our experience reviewing CBG products, and analyzing hundreds of anecdotal reports, we came to the conclusion that CBG is the least sedative of cannabinoids.

In fact, CBG can have a slightly energizing and uplifting effect, while keeping you grounded like CBD.

We believe CBG is a great daytime cannabinoid that can also be combined with other cannabinoids like CBD, for even better results.

Today you’re getting a list of the best CBG oil products on the market.

We have tested and reviewed 14 products on the following metrics:

From these 14, we listed the 5 best ones below: 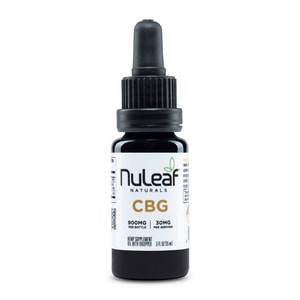 While CBG isolate or distillate is easy to find…

True full-spectrum CBG oil is hard to come by.

And while there are no studies that prove CBG is more effective when taken with other hemp-derived cannabinoids and terpenes, like is the case with CBD…

We believe CBG acts similarly in this regard. After reviewing dozens of CBG products, we came to the conclusion:

NuLeaf Naturals CBG oil makes it to the top of the list.

This CBG oil has high concentrations of CBG (5.9%), but also has detectable levels of:

How do I get these numbers?

NuLeaf Naturals has been one of the most transparent cannabinoid brands for 5+ years.

By now, I have no issues blindly recommending NuLeaf Naturals products to anyone. I’ve checked and analyzed dozens of NuLeaf Naturals lab-test reports and can say with confidence:

This is the real deal. 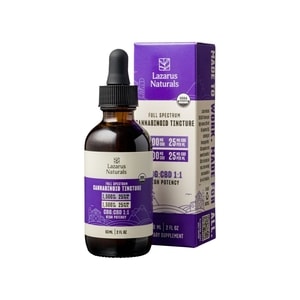 This tincture contains as much CBD as CBG.

It’s not a true CBG-dominant product.

But, it’s one of the few CBG products that have a good variety of additional cannabinoids and terpenes.

Any CBG product that has a wide variety of hemp-derived compounds, deserves a spot on our list.

Because there are so few of them!

Most CBG products contain one or two cannabinoids, no detectable levels of terpenes, and thus are less effective than CBG products like from NuLeaf Naturals or Lazarus Naturals.

Besides CBG (3.58%) and CBD (3.38%), this tincture has the following cannabinoids in it in detectable levels:

This CBG oil has the most hemp-derived terpenes of any CBG oil that we reviewed.

The total terpene concentration is 0.31%. Specifically, it contains the following hemp-derived terpenes that act synergistically to CBG:

As you can see, this is not a CBG oil that’s bolstered with one or two terpenes. It contains a wide range of truly hemp-derived terpenes.

If we look at how much CBG you get for every dollar, it’s less than NuLeaf Naturals. However because this CBG oil has as much CBD in it as CBG, it’s not the fairest of comparisons.

When we look at how much total cannabinoids + terpenes you get for every dollar, this is actually the most affordable option on the list.

In terms of effects, a product that comes with a CBG:CBD ratio of 1:1 is slightly more sedative than a true CBG-dominant product.

Not as sedative as a CBD- or CBN-dominant product, but more sedative than pure CBG. 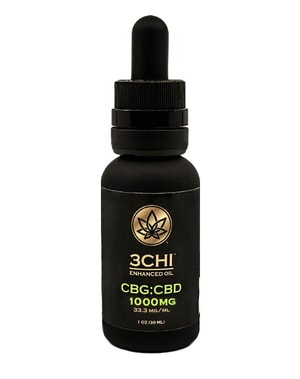 When it comes to alternative cannabinoids, 3Chi is one of our favorite brands.

They cover all the alternative cannabinoids and do so at an affordable price point.

This product contains at least as much CBG as CBD.

Plus, it contains a few minor cannabinoids in smaller concentrations:

This oil contains some terpenes:

As you can see, this CBG oil contains no detectable levels of THC. But it still contains more than only CBG or CBD.

We have crowned this CBG oil as the best THC-free, broad-spectrum CBG oil.

There are a lot of CBG oils being sold as ‘broad-spectrum’, but when you check their cannabinoid-profiles, you can’t see any other cannabinoids other than CBG or CBD.

This 3Chi oil is a broad-spectrum oil in the truest sense.

This is another CBG+CBD oil that contains as much CBG as CBD.

This oil as well has detectable levels of a few minor cannabinoids:

The concentration of minor cannabinoids is a bit lower than NuLeaf Naturals or Lazarus Naturals CBG oil, and a bit higher than 3Chi CBG oil.

However, this oil has no detectable levels hemp-derived of terpenes.

This is another solid option if you’re looking for CBG:CBD combo product.

CBDistillery is a highly trustworthy brand that has been extracting cannabinoids from hemp even way before industrial hemp got federally legalized.

In all these years, they proved that their products are effective and clean from toxins and contaminants.

All of their products come with a full lab-test report.

It's also the only product on the list that comes with a 60-day satisfaction guarantee. 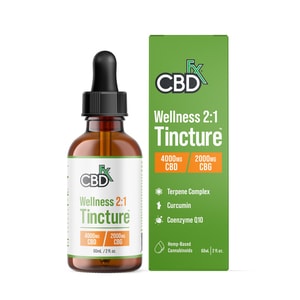 This is another CBG+CBD combination product.

The difference with the other CBG+CBD combination products on the list is that this one is CBD-dominant.

The CBG:CBD ratio is 1:3. There’s 3-times more CBD inside this oil than CBG. Still, this oil has more CBG than regular CBD oil.

In terms of effects, this oil is the most sedative on the list. Because CBD simply is more sedative than CBG. If you’re looking for the energizing uplifting effects of CBG, I highly recommend one of the other products.

But if you’re looking for a product that’s sedative, but slightly less sedative than CBD oil, this is a great option.

What I don’t like about this oil it has no detectable levels of minor cannabinoids. And while it supposedly contains a terpene complex, I also don't see proof of this in the lab-test reports.

This product is also marketed as a ‘wellness’ product that boosts your immune system. Curcumin and coenzyme Q10 are indeed proven, potent anti-inflammatory and antioxidant compounds.

Whether they act synergistically to cannabinoids is unclear. But at least individually, they have many beneficial effects.

What’s the Difference Between CBD and CBG?

CBD and CBG are both hemp-derived cannabinoids.

This means that CBGA can convert into CBDA.

You can conceptualize this process as follows:

But CBGA can also convert into CBG.

CBG has some similar effects to CBD. But CBG also has unique effects.

It interacts with some of the same receptor systems as CBD, but sometimes differently (2):

The activation of the α-2 adrenoceptor is associated with the improvement of impaired prefrontal cortex function (3).

CBG’s unique activity at the 5HTA1 serotonin receptor is thought to be responsible for its anti-depressant effects.

In general, CBG is thought to have potent:

As you can see, very similar to CBD. However, CBG can potentially have a more important role than CBD or other cannabinoids in conditions that are impacted by activation of the α-2 adrenoceptor or blockage by the 5HTA1 receptor.

CBG’s blocking activity of the 5HTA1 serotonin receptor is a cause for concern for people that use medicines that interact with this receptor, like traditional anti-depressant and anti-anxiety medicines.

Anecdotally and subjectively, CBG seems to be more energizing and uplifting than CBD. CBG is probably the least sedative cannabinoid we have tested.

How Much CBG Should I Use?

We experience good effects with 50-60mg of CBG.

If you’re taking a CBG + CBD combination product, take as much so that the total dose of cannabinoids is 50-60mg. That can mean 25mg CBG and 25mg CBD, for example.

These are not official dosage guidelines, it’s just what we experience when taking CBG oil products.

What Are CBG’s Side Effects?

Because CBG interacts with some of the same receptor systems as traditional prescription medicines, CBG can interact with various of these drugs.

Always consult your doctor if you’re using medicines and you want to use cannabinoid products.

Other than that, the side effects of CBG in humans haven’t been well researched. We currently don’t know if CBG has any long-term side effects.

Anecdotally, I can tell you if I use too much CBG at night I can have some trouble falling asleep.

Therefore, if you plan on using CBG during the night, I highly recommend combining it with CBD or CBN.

Does CBG Oil Show Up on a Drug-Test?

If you take CBG oil in the form of a full spectrum extract that contains some THC, you could fail a drug test because drug tests always screen for THC.

CBG itself doesn’t get screened for, neither does CBG convert to THC inside your body because the pathways necessary for conversion aren’t present inside your body. Therefore if you use a broad-spectrum or isolate product, you won’t fail a drug test.

If you want to avoid THC:

It’s important with any cannabinoid product, to make sure to always use a product that’s backed by a third-party lab-test report so you always know exactly whether and how much THC you’re ingesting.

If you want to try our best-rated CBD products, check out the review articles below:

The Best CBD Oil for Sleep

The Best CBD Oil for Anxiety

If you want to learn more about the effects of CBD, check out the articles below:

Benefits of CBD for Pain

Benefits of CBD for Anxiety

What Are CBD's Effects on the Brain?

CBD's Effects on the Brain

Is CBD Bad for the Liver?