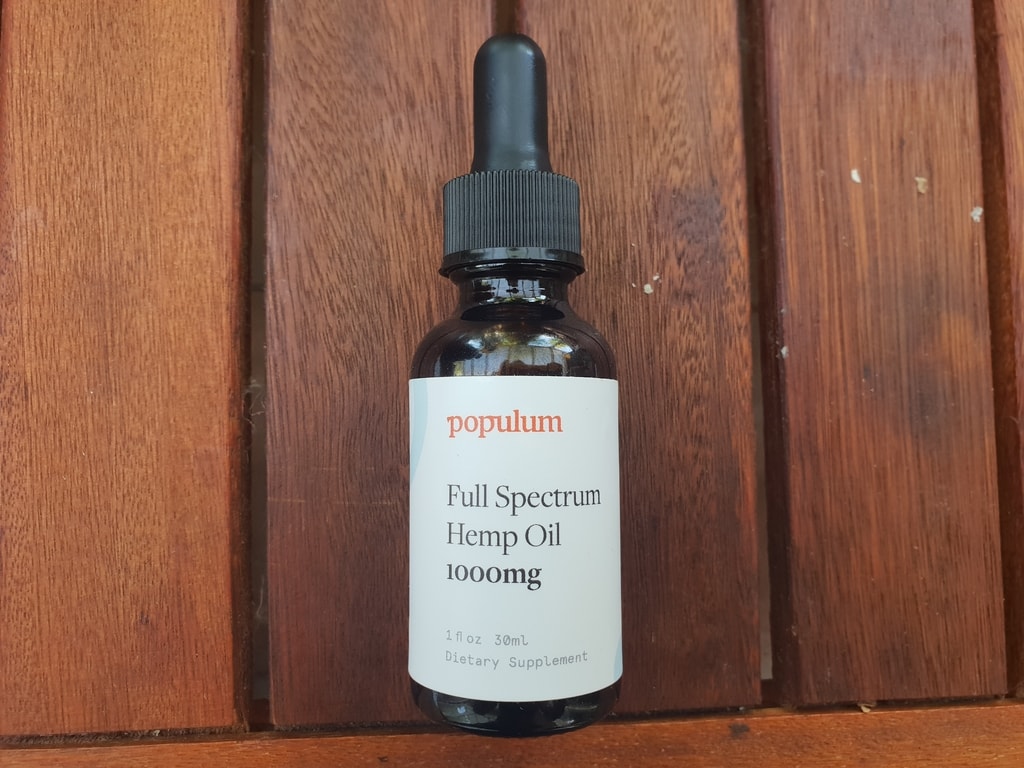 Today you're getting the results of our month-long review of Populum CBD Oil. We tested Populum CBD oil on two subjective metrics:

to other high-rated CBD oils that we’ve reviewed in the past.

After reading today’s review of Populum CBD oil you’ll exactly know if Populum is the CBD oil you should give a try, or whether there are better options for you.

The package I received from Populum was nothing out of the ordinary.

Just a simple cardboard box. Nothing on the outside gave away that it was CBD oil, so if you need to be discreet, you’re in good hands with Populum.

Now, even though the cardboard box was nothing out of the ordinary…

I was pleasantly surprised to see that they added the results of the lab-tests of the batch of this specific bottle, so I could exactly see the cannabinoid- and terpenoid-contents of the bottle of CBD oil that I’ve received. This is extremely rare and 95% of CBD oil sellers that even show their tests publicly either have the results of some general lab test (not even per batch) OR you have to really look up the test results by putting your batch-number somewhere in an online database. 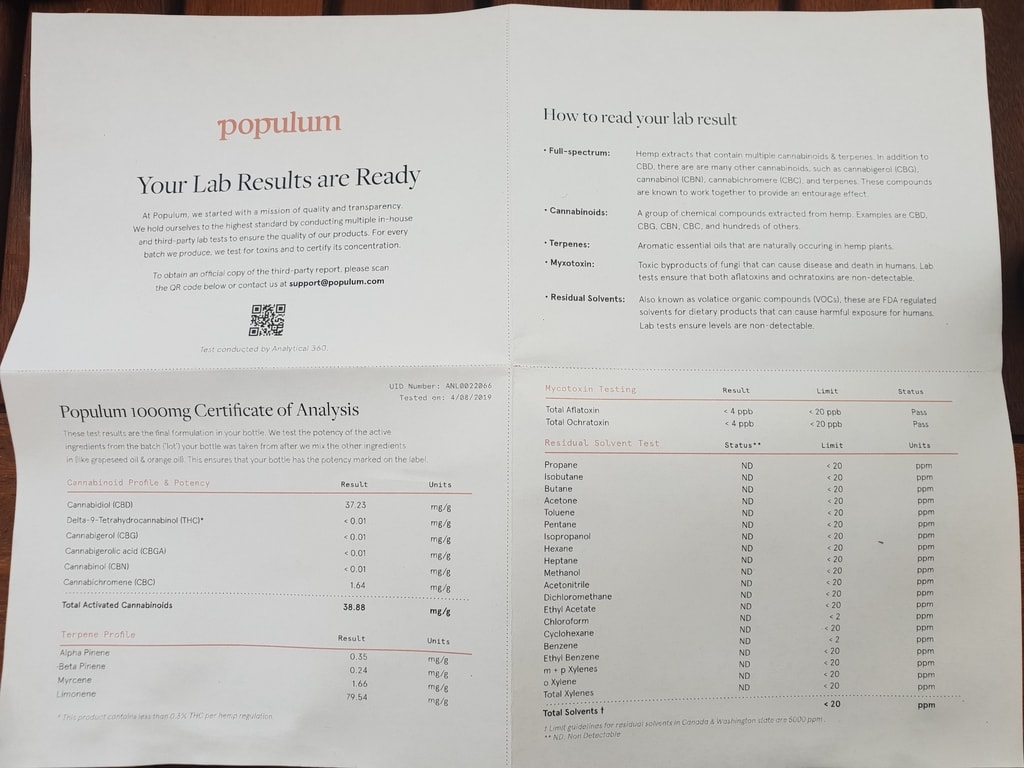 Having the test results included of the exact same batch that your bottle of CBD oil is made of with your purchase, is a degree of professionality that every CBD oil seller should strive for.

The bottle itself is just your regular glass bottle with the Populum brand label on it.

Transparency and The Importance of Lab-Test Results

In an industry where official regulations still leave much to be desired, we as consumers are fully dependent on CBD oil sellers regulating themselves (which we can stimulate by voting with our money).

The CBD oil industry is very new and there are countless of companies trying to make a quick buck by jumping on the hype train. With some of these companies, you have no clue what’s inside the CBD oil they sell, and in some cases, IF there’s even any CBD inside their ‘CBD oil’.

Therefore, at Herbonaut we find it extremely important that the company that sells the CBD oil is as transparent as it gets.

Well, you’ll be glad to know that Populum is one of the more transparent CBD oil companies.

Of course, from a transparency-perspective, the most important thing for a CBD oil seller is that they provide independent 3th-part lab-test results to show their CBD oil is free from contaminants like heavy metals and pesticides, and indeed contain the amount of CBD that they say it contains (and other cannabinoids and terpenoids in the case of a full spectrum oil).

Hemp is a plant that absorbs a variety of compounds at a high rate from the soil (compared to other plants). Compounds like:

Now, one way to make sure that your CBD oil doesn’t contain harmful compounds is to check the results of the independent 3th-party lab-tests. But then these lab-tests should’ve actually tested for all of these things as well, and not only cannabinoid-content for example.

Most CBD oil sellers test for:

One of the lab-test facilities they use to test their CBD oil meets ISO 17025 standards, which means this lab works based on high scientific standards and you can trust the results of these lab tests. 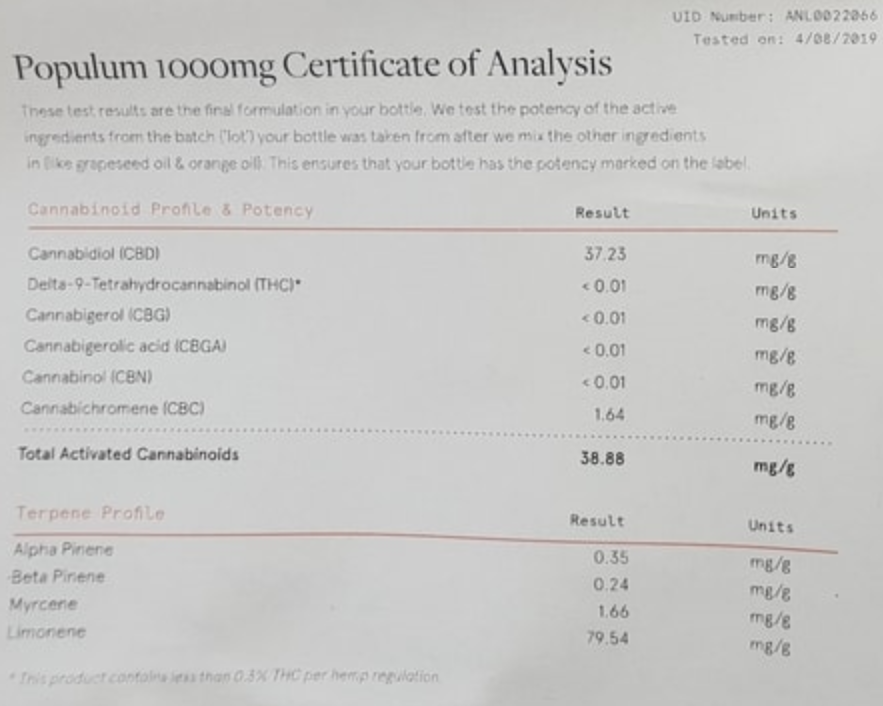 As you can see, the 1000mg CBD version that we’ve tested contains a very high concentration of milligrams of CBD per gram (37.23). Besides the CBD, noteworthy is the 1.64 mg/g of CBC. CBC is thought to have separate beneficial effects and most probably plays a role in the entourage effect as well.

Other cannabinoids aren’t present in my particular bottle of Populum CBD oil. But since they use a combination of different strains and plants, the exact cannabinoid-profile seems to differ on a batch-by-batch basis.

The terpenoid profile looks good. What catches the attention is the very high concentration of Limonene (79.54 mg/g). Now, when you look at the other ingredients inside Populum CBD oil, the unusually high Limonene-levels don’t look so strange. Populum CBD oil contains orange oil (which makes it the best-tasting CBD oil that I’ve ever tried, but more on that later). The oil of oranges contains very high levels of Limonene.

But what exactly does it mean for you to ingest such high levels of Limonene?

The mycotoxins and residual solvents tests look good, you’re not ingesting any of them in levels above those that are considered unsafe for humans. 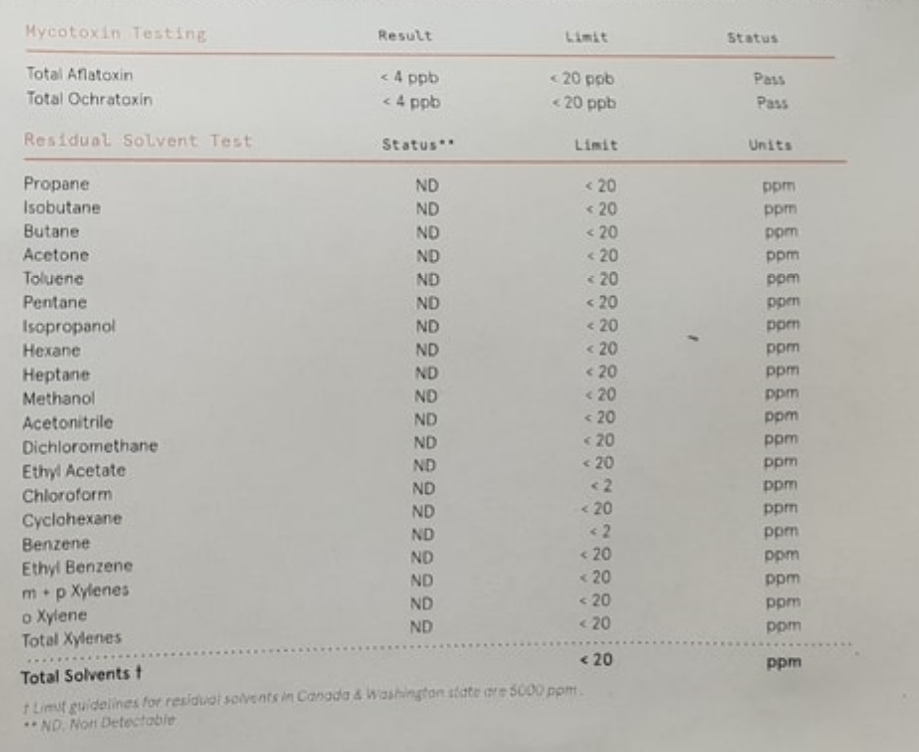 In our correspondence with Populum, they disclosed that they do test for pesticides and heavy metals, but they perform these tests only on the raw extracts on not on the final product. In theory, this is fine, and based on the transparency of Populum in other topics of relevance to the health of the consumer, I think we can assume they indeed conduct these tests. But to reach even a higher level of transparency it would be great if they disclosed the results of their heavy metal- and pesticide-testing (of the raw extracts) as well.

The Plants and Strains Used (the Source of their CBD Oil)

Onto the plants that are used for Populum CBD oil.

Populum CBD oil isn’t made of any particular strain. Populum uses a combination of strains that have a high level of CBD, other cannabinoids and terpenoids. All of the plants they use are 100% grown on licensed farms in Colorado. Colorado is theoretically the best place for the Hemp your CBD oil is made of to originate from.

Colorado’s state agricultural program has a strong foundation of regulations regarding the cultivation of hemp. These regulations act as protection-layer for consumers. Among these regulations, are pesticide regulations that control pesticide-use for Hemp that is grown for human consumption. The State of Colorado also performs routine inspections and sampling of all registered Hemp growers to check their plants for THC-levels.

The fact that Populum CBD oil is made of Hemp grown on licensed farms in Colorado, together with the lab-test results that show a good cannabinoid- and terpenoid-profile, are enough reasons for me to feel confident that the source of Populum CBD oil (the plants) is of good quality.

Onto the extraction methodology.

Populum makes use of a 2-step distillation process to extract the cannabinoids and terpenoids out of the Hemp. First, they use food-grade ethanol extraction, and after that fractionalized distillation.

The fractionalized distillation process works on the basis that every individual compound in the hemp extract has a different boiling point. By boiling the extract at certain temperatures you can safely remove the exact compounds that you don’t want inside the CBD oil.

In the end, Populum CBD oil contains other cannabinoids than CBD and a good amount of terpenoids, but can't fully be categorized as a ‘full-plant extract'.

Now, besides looking at the amount of CBD and other cannabinoids (in milligrams) per grams/milliliters, how we assess potency is by simply testing it ourselves for sleep and pain.

This means that this is a very unscientific and subjective test, and we can’t objectively ‘proof’ that one CBD oil is more potent than the other.

That said, Populum CBD oil is of decent potency in our experience. In general, when I took Populum CBD oil before sleep, I slept more sound. How I asses this, is by the times I wake up and how well-rested I feel the next morning. As said before, how ‘rested’ I feel is highly subjective and dependent on more factors than just taking CBD oil. But my life consists of routine and my activities and foods are mostly the same on a week-by-week basis.

Since Populum CBD oil isn’t produced from a single or a few of the same strains each and every batch, it’s consistency is going to differ on a batch-by-batch basis, since in theory, they could use a mix of different Hemp strains for every batch they produce. And when you compare the test results of different batches, you indeed so a different cannabinoid-profile for each one of them, except with one constant: the CBD-levels are always approximately the same (for the ones that I’ve checked at least).

So there's at least consistency with regards to CBD-content.

Populum is the best-tasting CBD oil that I’ve ever tried, period.

While some CBD oils have a rather heavy or bitter taste, Populum CBD oil tastes somewhat sweet and fruity.

The orange oil that they’ve added as an ingredient makes the CBD oil taste really amazing. With Populum CBD oil, you’ll be looking forward to taking your daily servings of CBD.

With most CBD oils I wash the bitterness out of my mouth after taking it, but with Populum I don't even want to wash it out because the after-taste is so good.

Also, you can use our coupon code to get 20% off: herbonaut

Populum CBD oil is a CBD oil coming from a professional and transparent company. They tick every box to be classified as a premium CBD oil supplier.

The fresh orange taste is simply a refreshing change from the majority of CBD oils that have a slightly bitter taste.

So if you're looking for a CBD oil that you'll look forward to taking on a daily basis, Populum CBD oil is definitely the CBD oil you should check out:

If you want to learn more about CBD or see our reviews of other CBD oils, check out the articles below: